With a 3hp motor winding up the 10” blade to a no load speed of 2,000 RPM,this saw has grunt to spare. Looking at the specs above, the cabinet saw also has a solid depth of cut, as well as a large rip on either side.The table also includes extensions that will widen the saw up to 42”, which is some serious space for even large operations.

What’s In The Box?

There are a whole host of tools to get you up and running. If you get this machine delivered, it is likely you will have to assemble a couple of parts, so they include more than you should need to bring your new cabinet saw to fruition.

Weighing in at a hefty 675 pounds, this saw is big. With weight comes sturdiness, and this saw is testament to the 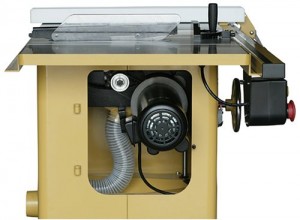 fact that a heavy saw reduces vibrations. The cast iron base weighs in at one of the heaviest in its class, so you won’t be able to blame the movement if your cuts are off! The PM2000 table saw (Amazon link) packs a massive 50” fence, which is their Accu-Fence System. This fence is of industrial quality and ensures that your cuts are as close to perfect as possible. For bevel cuts, the machine has indicators on the blade bevel scale that are easy to read and set.

When adjusting the blade, a large, cast iron wheel on the side makes it extremely quick and easy, and also very intuitive to do, especially if you are used to more complex and fiddly systems on cheaper saws.

Safety Features on the Powermatic

PM are a company serious about safety, with the inclusion of a magnetic interlock system which will ensure your machine doesn’t start up after power failures until you switch it back on. Also included is a stop button which can be pressed by your knee to kill the machine, which is a handy feature. The quick release riving knife and blade guard helps to prevent the possibility of kickback, and rises and sinks smoothly with the blade, with the gap never changing for any cuts. Something that the team at Powermatic have also included is a set of handy wheels on the cabinet saw. Moving a saw of this size around in a workshop can be difficult if you don’t have a forklift.

The PM2000 also features a push button arbor lock, which enables the quick and easy changing of blades without any safety fears.

Working indoors as 99% of cabinet saw owners do raises the question of air quality. The PM2000’s 4” dust port sucks the majority of all dust down into it due to the unique engineering design. The inside of the dust port is sloped so that the dust all gathers down at the bottom, which makes cleaning up after your project a breeze.

Walter Meier, the company behind Powermatic has been in business since 1921, and has no intention of leaving their products unassisted. The company offers a 5 year warranty, and they have authorised service centres throughout the world.

Summary of the Powermatic PM2000 Review

Cabinet saws used to be the sole domain of the contractor, joiner, or production plant. With the Powermatic, 230 volt 1 phase PM2000, this is no longer the case. The PM2000 stands in a class of its own among woodworkers and enthusiasts and builders, while also being praised by contractors all around the world. Being on 1 phase means that this saw will run on normal residential power (instead of 3 phase like other high horsepower machines). Let’s check out some more of the specs. Take a look at Amazon.com’s price on the Powermatic PM2000 Table Saw if you’re interested.